José Manuel Ballester is a Spanish painter and photographer who graduated in Fine Arts in 1984 from the Complutense University of Madrid and the 2010 winner of the National Photography Award.
His artistic career began in painting with a special interest in the technique of the Italian and Flemish schools of the 15th and 18th centuries. Starting in 1990, he began to combine painting and photography. Among its numerous exhibitions we highlight Places of Passage (Valencia 2003), Setting Out (New York 2003) or Room 523 (Museo Nacional Centro de Arte Reina Sofía, Madrid 2005), and recently Fervor de Metrópolis (Pinacoteca del Estado de Sao Paulo) and The Abstraction, in Reality, Sala Alcalá 31, Community of Madrid and DA2 of Salamanca (2011) and Hidden Spaces at the Academy of Spain in Rome (2012).
Collectively, he has exhibited on numerous occasions in ARCO, ART CHICAGO, ART FORUM GERMANY, PARISPHOTO, and ART MIAMI, and cities such as Dallas, Paris, Miami, Sao Paulo, Dubai, Beijing, Shanghai, Toronto, among many others.
He was awarded the National Engraving Prize in 1999. In 2006 he was awarded the Goya Villa de Madrid Painting Prize and later in 2008 the Madrid Community Prize for Photography. In November 2010 he was awarded the National Photography Prize by the Ministry of Culture. The jury awarded the prize by a majority for his personal trajectory, for his unique interpretation of architectural space and light, and an outstanding renovation in photographic techniques.
His works are part of the funds of the MNCARS, Marugame Museum of Spanish Contemporary Art in Japan, IVAM in Valencia, Miami Art Museum and Cisneros Fontanals Art Foundation in Miami, Central Academy of Fine Arts in Beijing, Patio Herreriano de Valladolid, 21 Century Museum of Kentucky, Würth Museum of Logroño, Fundación Telefónica, Banco Espíritu Santo, Guggenheim Museum of Bilbao and Fundación Coca Cola, among others 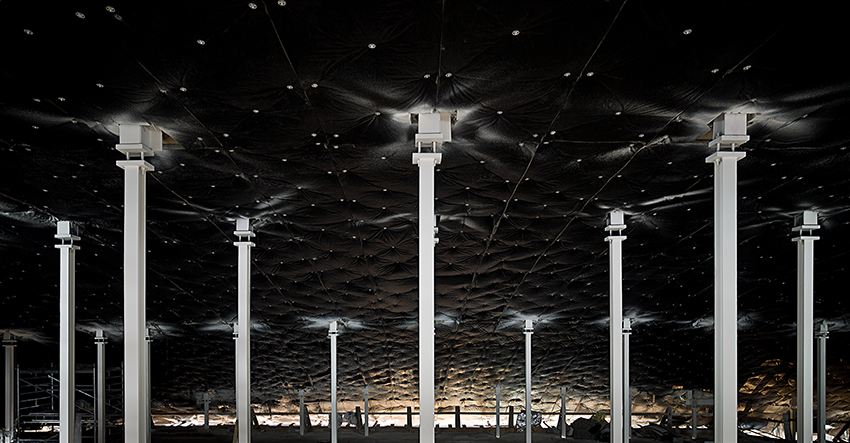 The exhibition brings together sculptural and photographic work that accounts for certain elements shared by the artists, such as the play of light and shadow in Pablo’s sculptures, the characters or subjects in José Manuel’s photographs, and the filling in the sculptural structures of Juan. Thus, they prioritize the light that radiates from their works, giving rise to a poetics of memory.